The following is a book excerpt from Napoleon Never Slept, a new book by Randall Collins

Success is a Career of High Emotional Energy 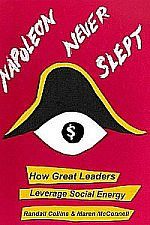 All highly successful people throughout history have in common that they were extremely energetic.

Where does their energy come from? Eventually most people get tired. How do these historically successful people keep it up, day after day, night after night, year after year? Call it “passion” if you like, but putting a word on it doesn’t really explain it. Why don’t big winners in the game of success get burned out, like most other people?

The top leaders energized other people around them, and got energy from them in return. They were experts at the art of social interaction. They generated emotional energy in their encounters, whether in full-scale meetings or brief conversations.

High  emotional energy (EE) is feeling pumped up, bodily and mentally. High EE persons are confident and proactive. They have a path to a goal and convey it to other people.

Some social interactions pump up people’s EE. Other kinds of interactions bring it down. People with low EE are hesitant, passive, even depressed. They quickly lose enthusiasm and are easily tired.

Great leaders make their social encounters generate high EE. And they avoid the kinds of encounters that bring EE down.

This can be done by making excited speeches to a crowd, but there are other ways to do it.  Caesar and Napoleon were good at conveying calm confidence, keeping people from losing their head under stress. Steve Jobs often riveted the attention of his work groups by insulting them about the quality of their work, but this was just the initiating emotion that got everyone focused. His emotional assaults turned into attunement as they argued out the details heatedly and at length, until they were together on a new path. Whatever the emotion, the key is first to make the group share it, then to transform it into a feeling of strength and purposeful trajectory.

This is the secret of how Napoleon hardly ever slept, or Jobs could stay up all night.  They got energy from the groups they energized.  And since Napoleon, or Jobs, goes from one intense encounter to another, he is getting a steady series of positive jolts of emotional energy. They are getting high on their work, getting high on running a successful organization. They don’t feel like sleeping, because they have so much energy; and because they are so hyped up by what they do when they are awake.

Virtually all leaders of big organizations are extremely busy, going from one meeting to another. Some of them get pumped up by their daily round, others become exhausted by it. What makes the difference is whether their micro-interactions are leveraging EE or losing it.

Several different kinds of networks are necessary for success.  Pumping up a circle of followers, of course, the intimate network that constitutes one’s team. But also there are dangerous networks, farther away from home base and its comfortable social trust, where deals and alliances are negotiated;  dangerous because both sides are risking giving key information to the other that might be stolen or used against oneself.

The most successful leaders handle dangerous networks by the interactional technique of emotional domination (EDOM).  EE and EDOM are key features of really top success. EDOM is the crucial feature of winning a battle, but also the key to career-making business deals.

The great success stories also have their down moments. We learn from this because it shows how EE is lost, the flip-side of how it is gained. We will see the interactional techniques that Bill Gates used to come out on top of Steve Jobs– despite Jobs’ incredible force of emotional domination, Gates had a way of countering it with a different emotion that kept him from getting sucked in.

The book is organized in three parts. Each dissects the life-story of a hugely successful career: Jobs, Napoleon, Alexander. They are interspersed with sidebars on key events in the lives of other historically successful persons. We see how Caesar put down a mutiny of his troops by speaking with just the right tone and timing; and how Caesar by careful observation of what happens in the first phase of a battle was able to create a second-phase strategy that made his army invincible. We examine how Jesus disperses a lynch-mob.

We will see that the great leaders are careful observers of the micro-details around them, that they cut through to the key details that make the difference between success and failure. That is another reason why great leaders are emotionally upbeat:  for them nothing is boring, because even small details are energizing when they point a trajectory into the future.

We will crack the mystique about genius, and see how some persons get this reputation by micro-techniques that outsiders have no awareness of.

We will see why many super-successful persons got started at a very early age, and why today’s bureaucratic and credential-inflated world is an obstacle.

Different personality types can all be successful. Great leaders worked with different emotions, but they all had the key qualities of keen observation of people and timing, social attunement, emotional energy, and when need be, emotional domination.

By dissecting the key features of how super-successful people interact, and how they built their networks, we will lay out what made them successful. It can be learned: the micro-sociology of success.

Excerpted from Napoleon Never Slept: How Great Leaders Leverage Social Energy,  by Randall Collins and Maren McConnell.  Published 2015 as an E-book by htpp://maren.ink

Randall Collins is Dorothy Swaine Thomas Professor of Sociology at University of Pennsylvania.  He is a former President of the American Sociological Association, and has twice won its Distinguished Book Award, for Violence: a Micro-Sociological Theory  (2008, Princeton University Press); and The Sociology of Philosophies: A Global Theory of Intellectual Change  (1998, Harvard University Press). His work focuses on networks, and on face-to-face interaction, using videos, photos, and close observation of emotions.