“For scientific discovery give me Scott; for speed and efficiency of travel give me Amundsen; but when disaster strikes and all hope is gone, get down on your knees and pray for Shackleton.”

In 1914, Europe began WWI and set about devouring a generation of European men.  Also that year, Ernest Shackleton, already a famed and knighted Antarctic explorer, headed an expedition to cross that continent.  The ice trapped and then crushed his ship, the Endurance, forcing months of camping on the ice followed by a six day open boat trip.  Next came a truly incredible three week ordeal as Shackleton and a crew of 5 others crossed 830 miles through hurricane and gale roiled seas in a modified life boat.  Then, he and 2 others traversed the uncharted interior of South Georgia Island (a first) and its perilous combination of mountains and ice fields (32 miles in about 36 hours).  Shackleton’s multiple attempts to rescue those left behind culminated in his arriving with a rescue ship four months after his departure.  Reportedly, he could not bear to watch from the rescue launch as his boatmates counted the number of survivors visible and waving on shore.  Everyone had survived.

I often explore the case with executives attending Wharton’s Aresty Institute of Executive Education because of its richness and the starkness of the colors of its lessons…and because as the novelist Thomas V. Pychon said, “You wait.  Everyone has an Antarctic.”  I even taught the case in Antarctica as part of an eight day/seven night Antarctic trek one hundred years after Shackleton’s expedition made it out. Research and cumulative leadership experiences support many of Shackleton’s practices and in these times, I offer a few up for you who lead when it matters most, like now.

What do these practices look like amidst Covid-19?  Scroll through a few stories about its handling by Angela Merkel, Jacinda Ardern, Lady Gaga (in combination with IBM’s Ginni Rametty and Pepsico’s Kirk Tanner) or Captain Crozier.  As for how much in the end, any of this matters consider Sir Edmund Hillary, the first European to summit Mount Everest.  Hillary also fulfilled Shackleton’s hope of crossing Antarctica, doing so as part of an expedition 40 years after Shackleton’s attempt.  When asked about Shackleton, Hillary leaned on a quote often attributed to another Antarctic explorer, Sir Raymond Priestly: “For scientific discovery give me Scott; for speed and efficiency of travel give me Amundsen; but when disaster strikes and all hope is gone, get down on your knees and pray for Shackleton.”  Or, consider what type of relationship do you want with your team, not just during, but after COVID-19?

Gregory P. Shea, Ph.D., consults, teaches, researches, and writes in the areas of organizational and individual change, leadership, group effectiveness, and conflict resolution. He is a Senior Fellow at the Wharton School’s Center for Leadership and Change, Adjunct Professor of Management at the Wharton School of the University of Pennsylvania and of its Aresty Institute of Executive Education, Adjunct Senior Fellow at the Leonard Davis Institute of Health Economics at the Wharton School, President of Shea & Associates, Inc, Senior Consultant at the Center for Applied Research, and a principal in the Coxe Group, an international consulting firm serving the design professions. He served as Academic Director for the Johnson and Johnson/Wharton Program for Health System CEO’s and for fourteen years as Academic Director for the Johnson and Johnson/Wharton Fellows Program for Nurse Executives.  His awards include an Excellence in Teaching Award from Wharton. He is a member of the Academy of Management and the American Psychological Association.

Greg is also the coauthor of Leading Successful Change, Revised and Updated Edition 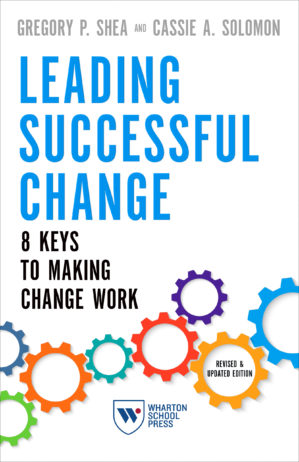