This article was originally posted in the Wharton Magazine, Spring/Summer 2017 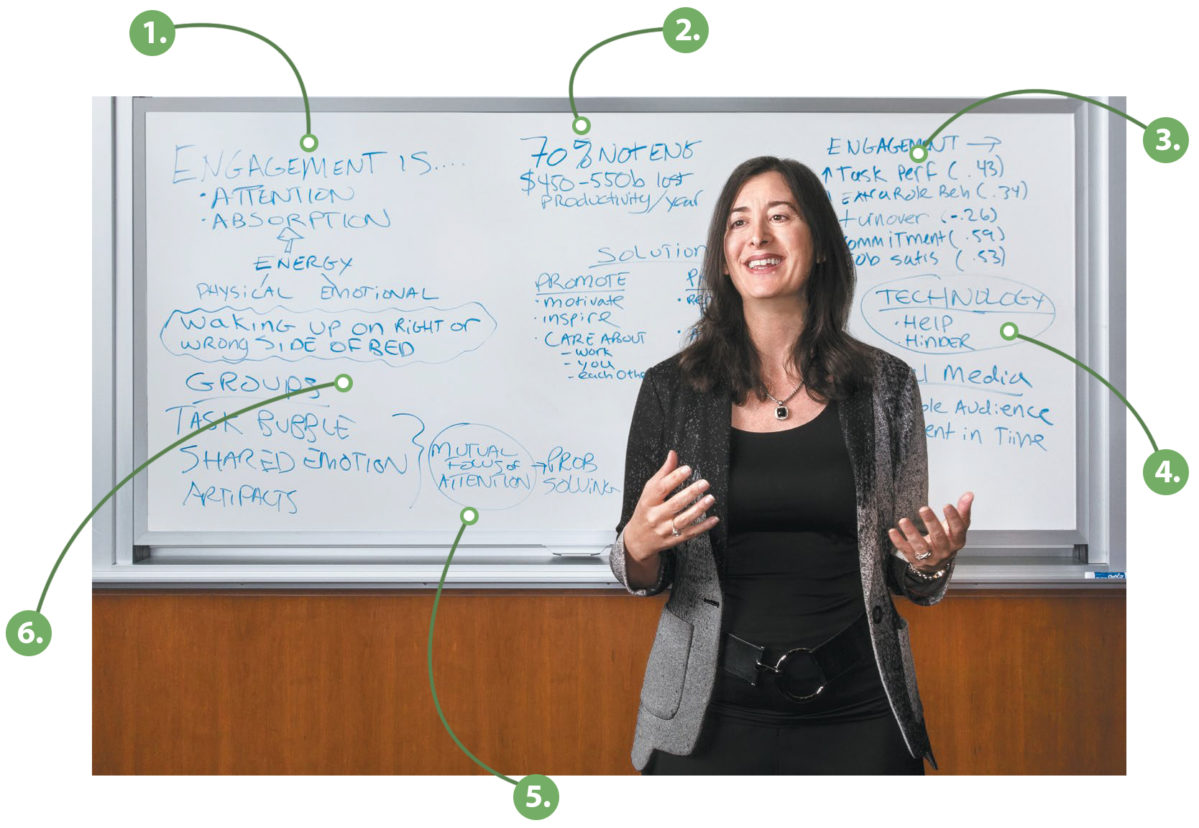 1.  The Emotion Effect:  We bring our feelings to the workplace. Do you have a cold? Did you have a rough commute? Are you getting enough sleep? What we do the night before impacts our ability to walk in the door engaged in the morning.

2. Disconnection Crisis: Supervisors shouldn’t assume that employees are engaged in their work; according to Gallup, 70 percent aren’t.

3. Engagement is Everything: The higher the engagement, the better the performance and the lower the turnover; engaged employees are more committed to their organizations and more satisfied with their jobs.

4. Tech, Tool and Distraction: Technology enables us to engage in work from wherever we are. On the other hand, people in meetings may be emailing, checking social media, and shopping online.

5. Strength in Numbers: Group focus promotes engagement: In 89 percent of the cases where there’s a mutual focus of attention, the problem gets solved.

6. Value in Visuals: People are more collectively engaged in a task when they have visual artifacts to enable focus—a whiteboard or computer screen, for example.

Employees aren’t as attentive to their work, as satisfied by their jobs, or as committed to their companies’ goals as you might think. And that dearth of engagement is costly to businesses, according to management department chair and David Pottruck professor Nancy Rothbard. In a condensed whiteboard version of her lecture “Leading in the 21st Century: Engaging Hearts and Minds,” she outlines ways for supervisors to encourage and increase workplace engagement.

For context, Rothbard points to Gallup surveys revealing that only 30 percent of employees in the U.S. say they’re actively engaged at work, which accounts for up to a $550 billion loss in productivity annually.

Engagement, she says, has two qualities: attention and absorption. Attention is how much mindshare you apply to a task: “You’re focused on doing your job; you’re not thinking about lunch,” says Rothbard. Absorption is when you’re so immersed in what you’re doing that you can’t be distracted—even if, say, your supervisor shows up at your desk.

While it may seem that attention and absorption are on a continuum, Rothbard’s research has found that supervisors tend to see the two qualities differently. Attentive people are focused but are also aware of their surroundings. Absorbed people are “in the zone” and often less aware of what’s going on around them. It turns out that supervisors may perceive attentive people as more engaged and absorbed people as less engaged. If you’re sitting at your computer and never look up, your supervisor may assume you’re not engaged and therefore not a good performer.

Engaging employees is a two-pronged process, says Rothbard: “It’s not just about helping and inspiring, but also about removing distractions. If people are distracted, they can’t focus.” After a Harvard study found that workplace output dropped when people were interrupting each other frequently, some employers began to devote parts of the day to “quiet time.” The result? More productivity. —Louis Greenstein