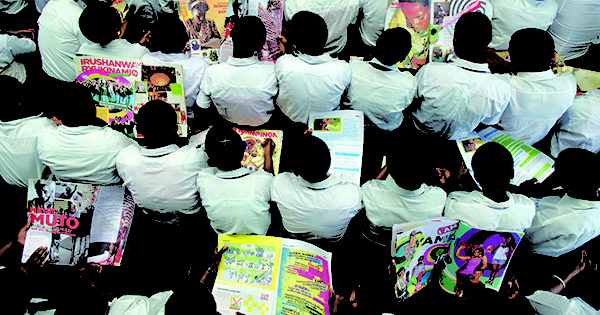 Maria Eitel, Chairman of Girl Effect, discusses how Girl Effect was founded on her passion for creating a better world by putting girls on the global agenda, encouraging Wharton Leadership students to use their talents, discernment and hard work to be a positive and effective force for change.

After seven years as founding Vice President of Corporate Responsibility for Nike Inc., I thought I was ready to move on.  But when Nike Chairman Phil Knight told me  he didn’t see me as a quitter, I paused and looked at where and how I could make the biggest impact on the world – not just at Nike. Phil knew there was much more I could do and with that short phrase, he had both challenged and bet on me. It didn’t take long to see what was right in front of me. Hand in hand with the company’s now solid responsibility agenda lay a unique opportunity in the yet to be directed Nike Foundation. What could happen if we used the Foundation to focus on a singular issue of great impact? Phil was right. There was a unique challenge and opportunity ready to be taken up.

Lesson #1: Seek out and listen to people who provoke and challenge you, but don’t give you the answers.

I did not want to take a traditional route. I proposed we focus on a single issue for a decade.  With that a given, choosing what to focus on and how had to be based on big insights, be ridiculously ambitious and built on a powerful strategy.I knew it would only be powerful if it was authentic and true to the highest version of who we were. So, I immersed myself in the history of Nike, the heart and soul of the company. Where had we come from? What were our deepest held beliefs and values?

Lesson #2: Be authentic, true to your origin story and your focus will come.

I read everything I could on the economics of human capital and with the help of Nobel Laureate economist, Mike Spence, and women’s historian, Jill Ker Conway, who were on the Nike board at the time, I sought to understand the forces of human capital, how it plays out in the short run and over time. The conclusion: there are huge pockets of under-optimized human potential on the planet. Instead of seeing us as a foundation going out to solve a problem, we would be a foundation that set out to unleash a solution.

Next up was identifying the population who held the most untapped human capital. I went to the field to talk with and experience real lives.  I spent time in the slums of Brazil and failing schools across the US. I talked with families in Bangladesh, surviving by having their children pick through garbage to find “valuable” waste. And I followed girls through their day who had been married as child brides at 12 years old in Ethiopia. What I experienced was both overwhelming and humbling, but eventually a picture emerged. All arrows pointed to women as the most under-optimized human capital. At first, it seemed an obvious focus, but in the detail of their lives, I saw that women were already burdened with poverty as they struggled with the health and welfare of their families.

Lesson #4: Used everything you have learned in work and life to date and most importantly, use basic common sense.

Before they are women, they are girls, I thought. If we can catch a girl at the crossroad, before all the burdens fall on her, we can solve the problem before it starts. Was it possible that the girl is the world’s highest point of leverage of human capital?  Could she provide the chance to stop poverty before it starts?

Girls are at the heart of the success or failure of families.  Girls either go through adolescence successfully and raise successful families or they “fail” and so do their children. And it was clear that the system – her economic, political, social and legal reality – is set up for her to fail.  Everywhere I looked, girls faced irreversible events like child marriage and made up for things like infrastructure failures with chore burdens – brutal realities that crush her potential. So, I concluded, if we could unleash her potential, the fullness of her human capital, we would unleash not just her capacity but the potential of her family, community and nation.

We had found our focus – what we would come to call the Girl Effect.  It wasn’t going to be an easy problem to solve or an easy sell to the company. It was high risk and not a quick-win strategy for a new foundation. There were much easier routes to take. I didn’t want to fail. I had to paint a compelling and credible picture based on the deep diligence and insights I’d gathered from around the world (lesson #5).

Lesson #5: Paint a compelling and credible picture based on the deep diligence and insights gathered from around the world.

We would later calculate the actual return of investing in girls and would validate that the potential upside was far greater than we had even imagined with our hypothesis.

Lesson #6: Make a big bet on the hypothesis.

I knew Nike loves taking on audacious challenges. It is in our DNA and that is exactly what we did. From there, the challenge became operational. How would we unleash the potential of girls at scale? I knew poverty is expressed in a punishing intergenerational cycle that has to be broken by more than a program, a handout or what we traditionally believe is the answer (building schools, health clinics, etc.). A traditional approach wouldn’t work if we wanted to win – winning being defined by girls successfully navigating the multiple risks and opportunities of adolescence. That meant coming up with a new and innovative strategy, operational plan and best of class team.

Lesson #7: Have a rock solid operational plan and amazing team to deliver your vision.

Which leads us to today. The idea and power of Girl Effect, now 12 years old, needed to be owned by a much bigger and diverse set of investors, beyond the Nike Foundation. In September 2015, Girl Effect became an independent organization lead by CEO, Farah Ramzan Golant, recruited from 27 years in the private sector. Girl Effect tackles the negative social norms that prevent girls from reaching their full potential.

Becoming a positive disruptor who unleashes a solution.

As a business school graduate, students will be part of a community, learn analytical rigor to expand your knowledge, increase capacity to lead, inspire and achieve. But the most important thing to do is to be maniacally focused on unleashing solutions.  Be a positive disruptor. Do not follow the traditional path, not with arrogance but with humility in the face of the world’s biggest challenges.  As Miles Davis said, “Learn the rules so you can bend them”. Do homework and be ambitious for the thing worth fighting for, not for individual gain.  Do not be afraid to fail.  Go beyond the ambition of incremental impact. Design and drive for scale. The world does not need tweaking. The world needs transformative solutions.

is widely recognized as a voice on innovation for social change and the issues of girls and women. Featured in Fast Company‘s League of Extraordinary Women, she has been described as a visionary and innovative thinker, a charismatic communicator, and a catalyst for progressive business models.

Girl Effect works with girls and those around them to create active champions of a world in which their full potential can be reached and the cycle of poverty can be broken. Deeply rooted in our theory of change, Girl Effect’s unique approach to social norm change uses the latest ideas in media, technology and girl-centred community engagement to challenge discriminatory gender norms and start conversations about how girls are viewed in society. By connecting with girls in their communities and building confidence in their own potential, we’re changing the way millions of people think, feel and act towards girls.