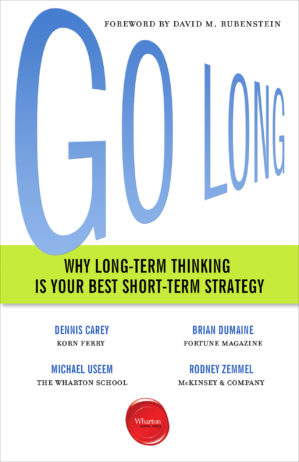 Why Long-Term Thinking Is Your Best Short-Term Strategy

The lifespans of companies are growing shorter each day. Why do some companies thrive and grow, while others fail?

Go Long: Why Long-Term Thinking Is Your Best Short-Term Strategy (May 8, 2018, Wharton School Press) reveals how some of the world’s most prominent business leaders resisted short-term pressures to successfully manage their organizations for the long term, and in turn, aim to create more jobs, more satisfied customers, and more shareholder wealth. Short-term thinking and its disastrous consequences crowd recent headlines, but it doesn’t have to be this way.

* Why did CEO Larry Merlo allow CVS to take a $2 billion hit—on purpose?

* How did director Maggie Wilderotter and her fellow board members engage top management to embark on an unusual exercise to help Hewlett Packard Enterprise build a long-term strategy?

* Why did CEO Paul Polman’s turn back to Unilever’s original mission of leading with a purpose to fuel profits?

* How did CEO Ivan Seidenberg convince his investors and board to allow him to make a $150 billion bet?

* How did CEO George Buckley find a way to address investor calls for 3M to spend less on research and development while still finding a way to innovate?

These leaders argue that a short-term mindset might satisfy investors for this quarter or next, but there’s a heavy price to be paid. Instead, they argue, long-term thinking is your best short-term strategy.

Called a “mandatory read” by David M. Rubenstein, co-founder and co-executive chairman of The Carlyle Group, Go Long is a critical resource for leaders who want their organizations to survive over the long-term and for anyone who cares about the global economy.

Dennis Carey is a Vice Chair of Korn Ferry and founder of the CEO Academy®. Brian Dumaine is a contributor to Fortune magazine. Michael Useem is professor and director of The Wharton School’s Leadership Center. Rodney Zemmel is senior partner at McKinsey and managing partner for New York, Boston, and Stamford. They are the organizers of the CEO Academy®, the annual off-the- record gathering of chief executives.